After a successful first year of the performance series at the communal gallery studio in the HOCHHAUS, Anja Ibsch and Teena Lange once again invite six artists who work performatively and time-based. Not every act has to be self-acting; one can also act about oneself with a certain distance. Especially if something expected is not performed. As humans we can distinguish between actions that we perform or omit. Time, place and intention often play their own roles in relation to each other. Why does it make sense to talk about omitted actions? What is at core, what is in_adequate and what is the periphery supposed to be?

There will be moderated discussions with the artists after the performances. The gallery space could be left peripherally.

Performance as art is subject and method in work and research. Essential ideas and elements are vivid processes as collaborative processes between human and non-human bodies, material, environment and technology, actor and spectator. Horizon of the work as an artist is the question for processes of artistic decision and the confrontation with aesthetics in the emergence. For almost 20 years, Florian Feigl has developed, presented and published performances, time-, material-, process-oriented works, lectures and essays, videos, curatorial practice, research and teaching.

Joël Verwimp is a Berlin-based Belgian artist. Initially trained as a visual artist and cook, Verwimp writes, curates, edits, collects and lectures. He was Bethanien resident of the Flemish Government, Curator at Netwerk / center for contemporary art, and co-initiated the MPA (Month of Performance art) Berlin. His work has been represented by the Berlin Gallery Kunstpunkt and hosted i.a. by Belluard Bollwerk International arts festival, ZK/U, Kaaitheater arts centre, and the Museum of Contemporary Art Kiasma. From 2009 till 2014 he developed together with Nicolas Y Galeazzi the VerlegtVerlag as a framework for performance on paper. Verwimp loves to mingle in debates surrounding ownership, migration, and hospitality and is currently doing research into forms of complicity. In February 2017, he started working on a paginated performance and lecture series with Lindsey Drury.

With a background in Stage Design (Akademiet for Scenekunst, Frederikstad, Norwegen) and a degree in Interdisziplinärer Kunst von der Kunsthochschule Berlin-Weißensee (2005), the Danish Ellen Friis has an unconventional approach to the basic questions of time and space. She is especially occupied with how various time structures influence or change the space and the narrative in live performance. In her works in theatres and museums in Denmark, Germany, England, Norway, Sweden and Poland, she combines the performances with video recordings to investigate what happens when time runs backwards, slowly or not at all.

Emma Haugh is a visual artist and educator based in Dublin and Berlin. Working across disciplines she weaves together installation, performance, publishing and collaborative workshop techniques. She is interested in re-orienting attention in relation to cultural narratives and develops her work from a working class-queer-feminist questioning of what is missing? A continued engagement with club culture and dyke aesthetics informs the collective making of temporary, autonomous spaces. Emma’s background in working with Augusto Boals’ Theatre of the Oppressed has inflected her work with the particular quality of overlapping critique and proposition making towards shared spaces of potential and alterity.

Boris Nieslony lives in Cologne. Since 1977 he is active as artist, theoretician and mediator with exhibitions, performances, lectures and teaching around the world. He is the co-founder of the Black Market International, member of PAErsche and organizes one of the most famous Performance Art Archives in Europe. „My research is based on the ethnographic and anthropological conditions of culture and the resulting questions of presentation and representation in art. I cannot and will not claim any style for myself. Each precisely formed question demands its own medium and shows itself in this light. Thus, terms such as painter, sculptor or performer are not relevant to me. The media spectrum in action art or performance art is so wide that I find myself in it.“

Thursday, 6th of Dezember, at 7 pm

Dolanbay is a Berlin based artist. His durational performances engender ephemeral alienated situations which occur in stratified time and space into an unfolding stratum of performative act. His performances resemble studio situations; practices in painting, drawing and installation. During his live work, Dolanbay reveals specific modes of art doing which resonate with the critique on the dichotomy of performative and constative modes of art productions, consequently engaging politics of aesthetics. 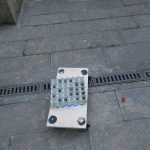 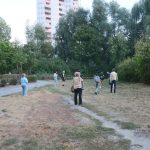 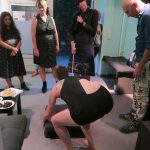 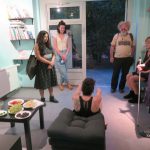 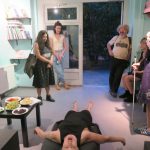 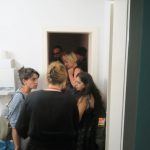 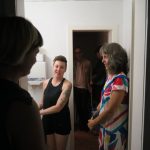 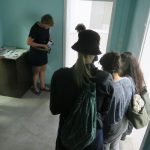 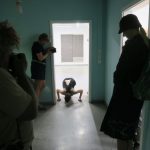 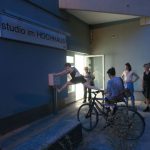 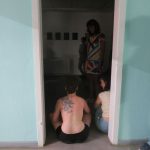 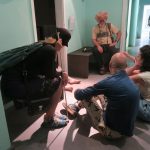 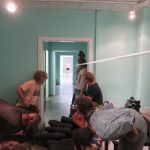 In the course of this year Anja Ibsch and Teena Lange invite six artists to the studio im HOCHHAUS whose artistic practice focuses primarily on performance art. Being an artist or not: as humans we can all distinguish between actions that we perform or omit. Time, place and intent often play a special role. Why does it make sense to talk about omitted actions? Not every act has to be self-acting; one can also talk about oneself with a certain distance. Especially if something expected is not performed. What is at core, what is in_adequate and what is the periphery supposed to be? There will be individual introductions to the artists and performances, followed by moderated talks. The gallery space could be left peripherally.

Andrea Saemann lives and works in Basel as a Performance artist, curator and networker. She loves working within movements and platforms initiated by artists themselves. 1997-2000 she organized the artist run space called «Kaskadenkondensator» in Basel. 2002-2012 she developed a tool to activate the performance art history with a project called «Performance Saga – interviews, performances, events», relating to the women pioneers of the first years of that art form. From 2011 – 2017 she coordinated the Swiss Performance Art Award. In 2014 she cofounded the association PANCH, a professional network for performance artists. Since 2014 she curates annually the «International Performance Art Giswil», a performance art festival in the middle of the Swiss mountains. In her own performance art work, the central focus lies on language, especially the spoken word. Stories and their relation to the written history, voice in relation to the thinking, words in body and space. 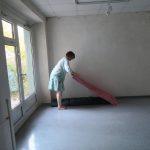 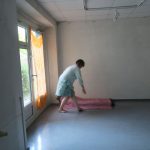 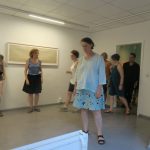 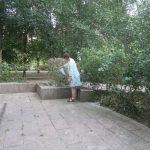 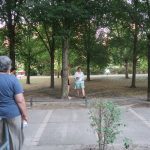 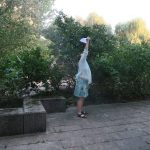 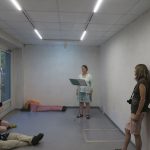