The exhibition Tierisch Opens on November 29, 2022 at 7 pm and shows, until January 25, 2023, with different artistic means views of animals.

Sonja Alhäuser draws many animals that play a role as food and describes, for example, the process of preparation. Recently, horses also occupy a larger, non-culinary, space in her work.

Ingmar Bruhn concentrates in his painting on wild animals, which he captures with rough strokes in their aloofness.

Kyung-hwa Choi-ahoi tells stories in her drawings that deal with the relationship of people to their (domestic) animals.

R. J. Kirsch paints in strong colors animals that he encounters in magazines or the like and thus usually appear more exotic.

Manfred Michl considers in his painting and drawing the interaction between animals and humans.

Susanne Ring deals in her sculptural work with animal forms that can seem unreal but always refer to something animal.

Sven Boeck was born in Berlin in 1965. After training as a mechanic and working as a camera assistant, assistant director and editor for GDR television, Sven Boeck studied directing at an external technical college from 1987. In 1990, together with other partners from the media industry, he founded the company KOPPFILM, of which he was managing director until 2010. After retraining as a tax clerk, he has worked at the satirical magazine Eulenspiegel as managing director and publishing director since 2015.

The Selective Microvoltmeter is a receiver and measuring device for high-frequency signals. As a mechanic apprentice at VEB Messelektronik I assembled devices like this one. I bought one on eBay at the beginning of the year. With pictures from the device and sounds received from it, I remember my time as a mechanic.

A find while dubbing old film material. This attempt from 1985 on 16mm film with a Russian Krasnogorsk camera is damaged by light at the mirror aperture. The film reel remained uncut at my place, so unlike my completed early experimental works, it did not go to waste when Koppfilm was liquidated. The music is by Hans Schanderl (www.hansschanderl.de).

Material from my video installation for the exhibition “Memo Abacus” in May 2019 in Berlin. The photos were taken by me in 1988. The traffic moves past us endlessly, the drivers move from light to dark.

I’ve known the area around Ostkreuz station for a long time. When we moved there at the end of 2019 with the satirical magazine “Eulenspiegel” (for which I work), I remembered the story I wrote about Susanne and this area thirty years earlier. Susanne no longer lives here, but in a dream I met her again when she visited the place of her childhood. Author, camera and direction: Sven Boeck, editing: Jürgen Winkelblech

A few dozen slides (one from Volgograd), a tourist’s souvenir purchase in the seventies, the colours bleached at the edges by chemical vapours, superimposed by me they begin to glow in surreal colours. Is that still socialist realism? Music: Hans Schanderl www.hansschanderl.de

Thoughts at the Berlin Wall memorial. Advice: Christina Schmidt, marine images from aboard the MV Ocean Viking in the central Mediterranean, (c) Flavio Gasperini/ SOS MEDITERRANEE and from www.pexels.com

The exhibition 50 Years of Utopia opens on 30 August 2022 at 7 p.m. and shows, until 23 November 2022, a view with artistic means of the urban structure Fennpfuhl.How does it live in the built utopia?

Holger Biermann captures everyday life in this area with his situational street photography; he moved around Fennpfuhl for weeks to find the motifs.

Thomas Brun‘s room-high architectural photographs convey the breathtaking urbanity of the area. He combines them with photographs of the sculptures and leisure activities from the Fennpfuhl Park.

Marula Di Como and Birgit Szepanski refer to historical aspects of the high-rise housing estate in their installation works.

Marula Di Como uses wooden elements to update decision-making moments in the planning and development of the neighbourhood. In her textile installation, Birgit Szepanski deals with the reality of homelessness, which was not visible in Fennpfuhl in the GDR and is only partially visible today.

Lukas Troberg turns the functional architecture of the area into a theme and stages ventilation pipes, bent bollards and protective hoops as extravagant guests of the exhibition.

They visibly don’t care what others think and stage their exclusivity in an overly conspicuous way. So much so that one could get the impression that they chose their appearance with the public in mind, from whom they actually wanted to distance themselves…

Rashidi has always worked entirely away from mainstream conceptions of filmmaking, striving to escape conventional storytelling stereotypes. Instead, he roots his cinematic style in a poetic interaction of image and sound. He generally eschews scriptwriting, seeing the process of making moving images as exploration rather than illustration. His work is deeply engaged with film history, and primarily concerned with mysticism, philosophy, esotericism, cosmology, phenomenology, and hauntology. The films are wildly experimental and often surrealist, magical realist, and mysterious, and have been associated with the Remodernist movement. They are unified by his oneiric imagination, idiosyncratic working methods, and the dreamlike experience of watching them.

The Homo Sapiens Project (HSP) is the distillation and, in some ways, the culmination of my experimental film practice. I have always been committed to making deeply personal, formally experimental work that collapses the boundaries between alienated subjective perception and the inexhaustible mysteriousness of the moving image. I view cinema (in the broadest sense of the word) as a laboratory. My audio-visual works are experiments in which my perception and inner life are employed as a ‘reagent’. My work begins with sound and image and works intuitively ‘outwards’ towards ideas. I generally eschew scriptwriting, seeing the process of making moving images as exploration rather than illustration. My work is deeply engaged with film history and personal life, both as an artist and individual.

This special edition of HSP was specifically curated for the studio im HOCHHAUS. It reflects the unsettled, mysterious, formally challenging and paradoxical nature of the series. It covers a decade of cinematic experiments from its inception in 2011 to the present day.

Rouzbeh Rashidi (born in Tehran, 1980) is an Iranian-Irish filmmaker. He has been making films since 2000, at which time he founded the Experimental Film Society in Tehran.

The artists Roman Pfeffer and Christof Zwiener survey the world of things in the Studio im Hochhaus. On 16 November 2021, at 7 pm, the exhibition opens and gives an insight into their interventions and deformations. It can be seen until 19 January 2022 in the studio im HOCHHAUS at Zingster Straße 25.

In their works, both artists charge things with history and expectations and interrogate the materials in different ways: Pfeffer uses a wide range of artistic possibilities to investigate the dimensions and proportions of things and to bring them into new forms, as in the reshaped 12’rowing boat that can be seen as Braintwister in the exhibition. In Zwiener’s work, the narratives of found objects and places play the main role. Through the predominant use of readymades, which are arranged site-specifically and occasionally alienated, Zwiener makes the superimposition of times visible. Past, present and future are here directly linked to an object, a building or a place.

Roman Pfeffer was born in 1972 in Vöcklabruck, Austria. He studied painting at the Academy of Fine Arts with Gunter Damisch in Vienna and at the Kent Institute of Art and Design in Canterbury from 1996 to 2001. He is a member of the management team of the TransArts class at the University of Applied Arts in Vienna, where he also lives.

Christof Zwiener, also born in ’72, from Osnabrück, studied interdisciplinary sculpture at the HBK Braunschweig. He lives and works in Berlin as an artist and curator. He organises temporary exhibition projects at various locations, often in gatehouses. 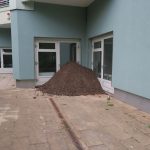 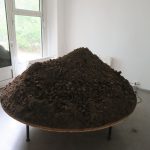 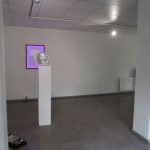 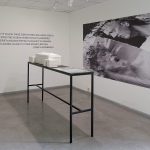 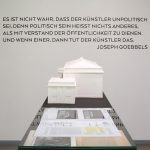 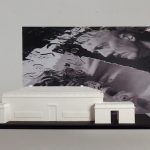 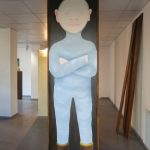 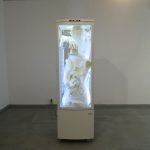 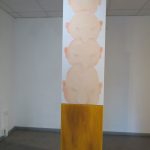 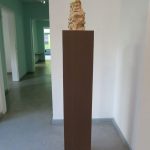 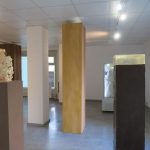 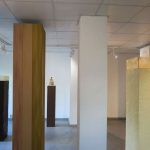 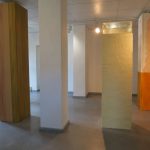 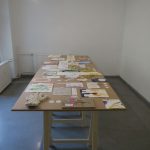 31th of Januar to 5th of April 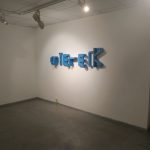 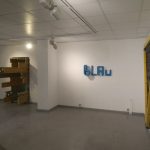 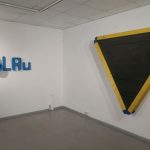 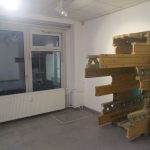 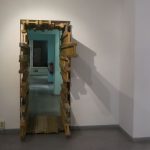 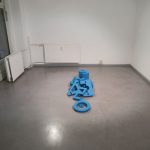 There is no secret
Where does narrative start and where does it end? A reworked horror film, with layers and cut outs;
onto which had been projected, simultaneous appropriation and alienation of pictorial material. How
pictures, painted over with the remainders of the previous image and remnants of time, contradict
linear time. Within this approach, a combination of numerous time lapses.
A notion of being pursued is central: A woman and her double, the performer. She imitates and
repeats the actions of the protagonist and sets in train an interplay between the filmic image and
performance. Settings are the nightly scenarios: Deserted streets and landscapes, a hotel room and a
church with organ.